Above and Beyond with Duelist King NFT — A Recap 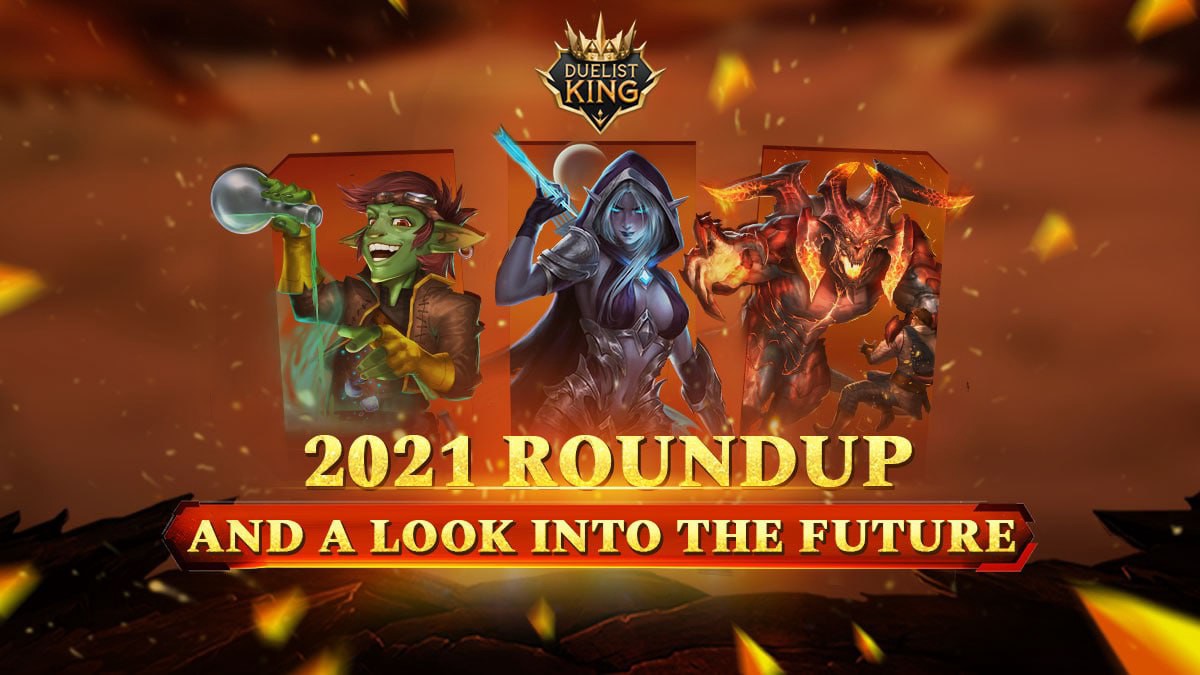 Duelist King is not just another NFT card game. The project is revolutionizing the way people buy, collect, play, trade, contribute designs, and earn in NFT card games. It operates on a Win2Earn model which through top-notch gameplay and design,enables players to enjoy the game first, engage with the project second, and finally earn value. This evolves the play-to-earn model by attracting gamers with enjoyable gameplay rather than just the earning potential.

Furthermore, through the power of DAO and tokenization, Duelist King has created the first-ever democratic NFT card game where the player’s shape all aspects of the game. For example, Duelist King allows you to customize your deck, choose your own style of play, and contribute in designs which the community can vote on via the DKT (Duelist King Tokens) governance tokens.

2021 was an incredible year for Duelist King. Since establishing Duelist King on May 20th, our platform has achieved several milestones and broken records. The hard work of our team combined with the community’s support has enabled us to achieve the unthinkable. We would like to thank you for your support.

Over the last year, we achieved many milestones. Firstly, we published our first Litepaper about fair distribution on June 1st, which highlighted the core attributes of Duelist King and how we will use the DAO to revolutionize and democratize gaming and also confirmed our first investment on June 30th by BoostXLabs.

Likewise, we implemented Oracle and dRNG on September 15th, to transform how our community trades, buys and plays to earn. Implementing the Oracle and dRNG allowed Duelist King to distribute cards on the blockchain, powering our card sales. Likewise, we outlined our game economics and gameplay on November 15th. The reveal outlined the fundamentals of Duelist King gameplay and how the economics of the game works in tandem with card-based gameplay. Understanding the economics is crucial to understanding gameplay and vis versa. We successfully outlined both, preparing consumers for the release of Duelist King next year.

In October, we gained official endorsement from major crypto players Cronos, Fantom, Polygon, and Cardano. The approval helped verify Duelist King and its DKT token as a major player in the blockchain gaming industry.

Furthermore, we broke the record books by launching our first card sale on September 15th. The card sale sold a record 250K NFT’s in 45 minutes. Each box was valued at $5 and sold out instantly due to high demand.

We had the most successful launch on Occam.Fi for our IDO. Occam is a leading decentralized platform for Cardano; Duelist King launched its IDO on the platform smashing records. We raised 68.36 ETH and sold out 166,000 of $DKT. We also had a record-breaking 544 participants and 1500 KYC-ed Registrants.

Correspondingly, we held our IFO on Pancakeswap, a platform considered one of the leading decentralized exchanges on the Binance Smart Chain. It took place on October 27th, hitting impressive numbers such as $640 million being committed and 150,000% being committed vs raised funds. Furthermore, with our farm and syrup pools, we sold $9 million in volume.

On November 1st, we gained strategic investment from Fantom Foundation, making it one of the first gamefi projects on the platform. The investment enabled Duelist King to scale, enabling faster and more secure transactions with lower gas fees.

0n 27th of December, we established a very exciting Partnership with TofuNFT, a marketplace focused on GameFi and collectibles, rebranded from SCV’s NFT market. This multi-level cooperation agreement will help users to trade their NFT cards with ease and will allow the future implementation of $DKT as a payment currency. Our latest collection is LIVE on their NFT exchange.

We got nominated for the Hackernoon Noonies awards for Blockchain game developer of the year. Voting closes on January 15th, so make sure to vote for us! It is a prestigious tech award that we would love to win. You can find out more information about it here.

Over the course of the last year, we launched two Duelist King card sales, both sales were a huge success with fans purchasing cards at a record pace. We could not have achieved such sales without our incredible partners and of course you the fans.

1st Round of Card Sales

Three months ago, Duelist King rocked the NFT space through the first round of card sales. The first batch of 50,000 mystery boxes of cards sold out within 45 minutes on Sept. 15, 2021, confirming massive demand for the Duelist King NFT card game. Each box during the first sale was valued at $5 and gave users an equal chance of obtaining rare cards.

2nd Round of Card Sales

We sold our second batch of cards on December 15th, selling 100,000 NFTs. The card sale was a huge success.

The second batch of cards was unique in design and offered both veteran and new players the opportunity to power their decks.

For those of you lucky enough to grab a few, congratulations! The battle for supremacy is right on the track. With this massively successful card sale, Duelist King has cemented its position as a community-driven and community-owned ecosystem.

PaintSwap and Artion are two of the biggest exchanges of Fantom Foundation. Both exchanges will list the Duelist King’s new collection and users will be able to trade their cards on those open markets. The sale was supported by the Fantom Foundation, which also sponsored 100% of the gas fees for opening NFT boxes, which will be refunded to the buyers.

Fantom Network provides an excellent environment for our users to trade our NFTs with high speed and low transaction fees. Duelist King is officially endorsed by Fantom Foundation.

DePay enabled our Users to utilize Stablecoins, DKT and BSC tokens as a means of payment for the second NFT cards sale. Duelist King is the first NFT card game to use DePay for fully decentralized payments. DePay is firmly helping the NFT gaming community as a cornerstone for the growth of the crypto universe. Every sale was facilitated by DePay which helped Duelist King buyers to invest in one of the most exciting NFT card games on the market without any problems.

With phase 2 of card sales, we offered 20 new unique designs, packed with new game characters having unique attributes that allow players to collect a decent starting deck and explore everything Duelist King offers. Going forward, there will be 25 phases of card distribution, each featuring 20 unique designs.

Duelist King is not just another NFT card game. The project is revolutionizing the way people buy, collect, play, trade, contribute designs, and earn in NFT card games. It operates on a Win2Earn model which through top-notch gameplay and design, gets players to enjoy the game first, engage with the community second, and finally earn value.

A Look to the Future

Next year we look to the future, in what we know will be the biggest year for Duelist King! In Q1, we are set to tease our V3 cards and introduce DKT staking on January 21st.

We also look to establish a playable demo on January 31st, which will allow all of you to experience the Duelist King action. Similarly, we are geared up to launch our third set of cards in February and release the full game around the middle of March, with a card transfer function also releasing in March. It is an exciting time to be a Duelist King fan and we are just getting started!

At Duelist King, we are fine-tuning the game play and game design so the Player vs. Environment features will be ready early next year. Community activities like voting/art contests, loyalty programs & mini games to keep all followers engaged.

Range of partnerships to bring transparent, community-driven and permissionless gaming to the masses, all these exciting new alliances are underway.

On this note, we’d like to say THANK YOU! To the players, the token holders, and the entire Duelist King Community. This is still just the beginning of our legend, and you, our community, are the ones writing it.

Don’t miss out on the exciting upcoming announcements and weekly recaps by subscribing to the Duelist King Newsletter. Follow our socials!