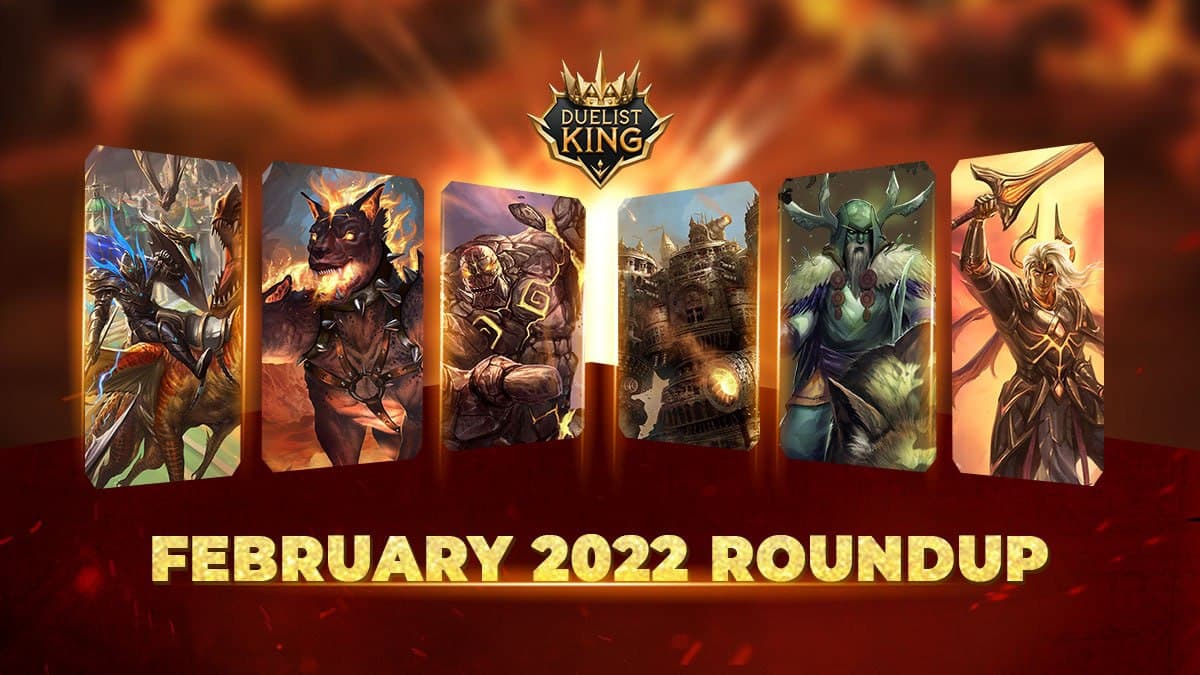 The month of February has been another huge month for Duelist King. Over the past four weeks, we have not only launched new community activities but won awards and strengthened our partnerships across the board. We've done all this while preparing for our closed Alpha, releasing in March. This blog will detail what Duelist King has achieved over the last month while shedding some light on what is ahead.

We launched our early access sign-up, allowing you to sign up for one of the most highly anticipated demos in NFT gaming. We, unfortunately, had to delay the release of our Alpha, but after much internal testing, we are ready to release it in the coming days. We want to thank all of you for signing up to the Alpha; the hype behind our demo has been unreal. Likewise, we teased more of our V3 cards and their stories alongside demo preparations.

Stay tuned for more information regarding these stories, and expect an exciting lore focused blog soon, on our website, highlighting the game's lore, in line with the release of our Alpha, to make you even more hype for our game.

Here at Duelist King, we have also focused more heavily on more in-depth technical blogs. Over the last two weeks, we have released in-depth blogs about our fair distribution systems, DAO and gameplay. We want the experience associated with Duelist King to be thrilling on the battlefield and educational; these blogs attempt to do just that.

In the future, we will be busy preparing for the full launch of our DAO, handing you control of decision-making processes. These blogs are a way of informing you so that you are best prepared for when this happens.

In the latter half of the month, we formed new partnerships with the likes of HundredDAO and participated in numerous AMA's such as with our friends over at Moonwalker. We also teamed up with the Synapse Network to give away free NFT boxes. Our partnerships are incredibly important to us. As we move into 2022, we will strengthen and bolster our collaborative partnerships to support game development.

February is also the month of love, and boy, didn't we celebrate it with you. We launched some fun games on valentines day to celebrate the occasion and even doubled down on our usual fun activities on Telegram. Likewise, we launched several AMA's such as with our game producer Vincent Bui and game designer Bui Anh Vinh. These AMA's were a huge success, so expect weekly AMA's of similar ilk.

Winning Awards for the Community

To round off the month, we got the best possible news. Yes, that's right...we secured the runner up position for blockchain developer of the year at the Hackernoon Noonies. We smashed through the competition, beating prominent games in the space. We want to congratulate all those involved in the Noonies and the winners who bagged one of these elusive awards.

As a result, February has been another huge month for Duelist King. We have not only consolidated our partnerships and strengthened our community engagement but won awards and prepared for the game Alpha release at the same time. As you can tell, the team at Duelist King is working around the clock to make Duelist King the best game possible. But this is just the beginning. We have a ton more to show and tell you in the coming months. We cannot wait!

Check out our socials to stay up to date with the latest DK news and information: https://t.co/BKBRhxW58o