Duelist King gets TWO audit certificates by HAECHI Audit, helping gain credibility and bring a sense of security and sustainability to the community! 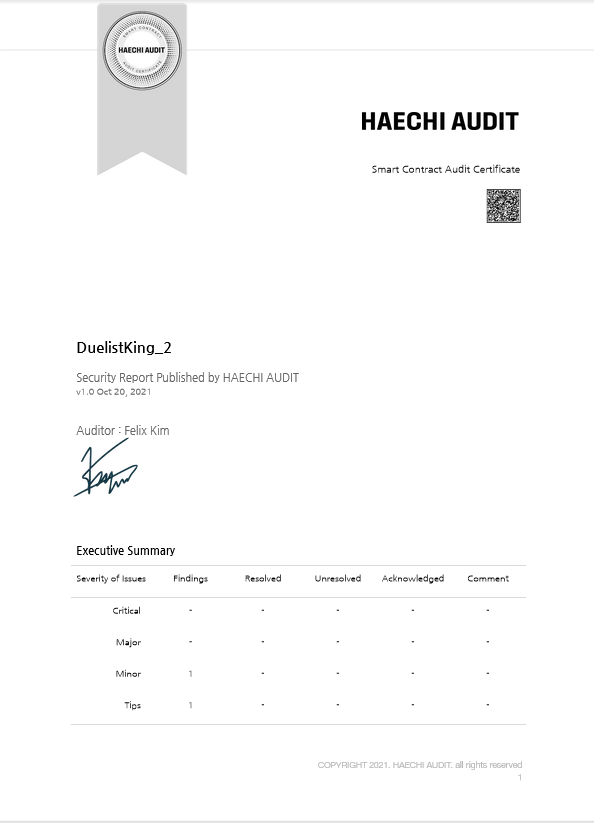 Duelist King is quickly rising to the top, becoming one of the fastest growing projects. With an ever evolving and growing community, it’s crucial to us to ensure we have credibility and have a sustainable yet safe ecosystem.

This brings up one of the most common questions we get, “Have you been audited?” and “Do you have an AUDIT certificate?”. Well, we’re thrilled to announce we don’t have one BUT TWO audit certificates from one of the leading companies in the global blockchain industry, HAECHI audit.

They are one of the most trusted security companies, partnering up with some of the biggest names in the blockchain industry such as Harvest, SuShiSwap and were even selected for the Samsung Electronic Startup Incubation Program and have received grants from the Ethereum Foundation and Ethereum Community fund!

Partnering up with Duelist King, their report was an audit on the security of our smart contracts! Their focus was to see if the smart contract had implemented the designs that were disclosed to the public and in the published material as well as making it a point to ensure it was safe and secure for the community.

The first AUDIT focused on:

We are thrilled to announce HAECHI audit found:

“HAECHI AUDIT found 0 critical issues, 0 major issues, and 0 minor issues. There are 2 issues categorized and explained as Tips that can improve the code’s usability or efficiency upon modification.”

If you’re interested in learning more, you can read the full report here!

It gets better! HAECHI has just released their SECOND Audit report this time focusing on ten different contracts that were subject to audit, they were:

“HAECHI AUDIT found 0 critical issues, 0 major issues, and 0 minor issues. There is 1 tips issue that can improve the code’s usability or efficiency upon modification.”

You can read their second report in detail here!

These reports are crucial to help the Duelist King community grow, providing new members a form of comfort knowing the Duelist King project is safe, secure, and stable! By partnering up with one of the biggest names in security within the blockchain industry, we hope this will push those on the edge to be a part of Duelist King!

Furthermore, through the power of DAO and tokenization, Duelist Kings have created the first-ever democratic NFT card game where the player’s shape all aspects of the game. For example, Duelist King allows you to customize your deck, choose your gameplay, design your own game or build a unique tournament that the community can vote on via the DKT (Duelist