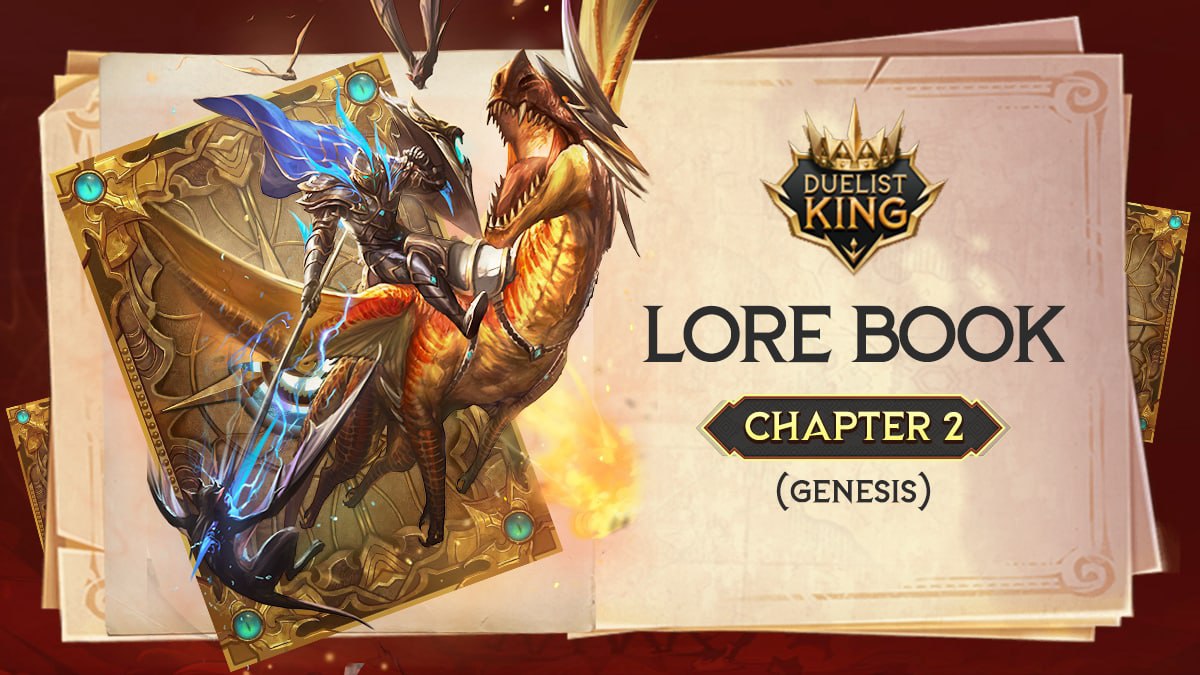 Any form of entertainment needs a story, from books to film and even video games; each medium requires a background and lore that makes a particular piece of entertainment feel like its characters and inhabitants live in it. Here at Duelist King, we pride ourselves on the game's lore and story. It is a focal point of Duelist King and will be for years to come.

We launched our first lore book alongside our closed alpha two weeks ago. Today, we are proud to launch our second lore book, fleshing out the lore of Duelist King. This lore book will detail one of the kingdoms in Duelist King, that being Genesis (high heaven), a place of gods and angels, where no shadow is allowed to creep.

The Home of the Angels

Genesis is the home of the angels, a place where they are born, and light never fades. No shadow is allowed to enter Genesis, subduing evil. Genesis is a land with unique properties, one with floating angel-shaped islands surrounded by force fields to stop incoming evil.

Creatures entering high heaven from the continent can only access Genesis via a single teleport gate located in the frozen land of Norgard. Due to the force fields that protect it, there is no night, and the angels never sleep. They collect souls from below as daylight breaks and the sun sets.

The Guilding Power of the Light

Head of the realm is The Father of Angels, who sits on his throne, watching over the content with eagle eyes. In Genesis, the Father of Angels judges the souls of those in Dularia and purifies them to create angels.

Likewise, the kingdom is also home to gods of mighty power. Such gods include the Invincible Swordsman, a powerful god of war, that looks upon Duelaria grief-stricken by the continuous violence. Similarly, other gods inhabit Genesis, those with immense power and the strength to help mortals in need like Zenobia Glider.

Zenobia Glider flew down from Genesis at breathtaking speed, wings glowing in the sunlight. She broke the atmosphere, catching on fire as she crashed through the sky like a lightning bolt.

Spotting knights of the Seven Kingdoms in trouble, she lighted near the group of soldiers.

Dazed by her beauty and blinded by her light, the men stood stunned as Zenobia Glider soared through the air towards them.

"What is it, mortal men" "What hath stricken fear into your bones," she said, with grit in her voice.

Unable to speak, the men pointed behind her, trembling as they raised their hands.

Tyrant X materialised from the shadows, shrieking and running at Zenobia Glider, ready for attack.

Gracefully bypassing the attack with a simple sidestep, she smiled at the men as Tyrant X prepared to charge at her again.

Conjuring up a bow out of thin air, she sprung a fire-lit arrow at the monster, catching its right knee with perfect precision. Wounded and immobilised, Tyrant X fell to the ground, screaming in distress.

"Run thou, little fellows; you are saved," She said to the men. With haste, the knights departed.

Comforted that the beast was not bygone, she began to ponder what her brothers and sisters might have done.

She chuckled as she envisioned what the Invincible Swordsman might have said to her for not slaughtering the beast.

Knowing that war was upon them, she realised that it wouldn't be long until she had to start slaying herself.

The Fight Between Good and Evil

Thus although the gods have tremendous power, they always help those in need. However, they are not untouchable. Often, the gods put themselves in harm's way to help. Books of old tell the tale of how Skytten the Saddle, a god of hind legs, met his match when encountering evil.

Skytten Saddle engaged the Necromancer with extraordinary force, his hind legs upheaving the ill demon away from the village.

Skytten Saddle took swings at the Necromancer with his larger-than-life scythe, meeting the demon's power with parity.

He took a sharp jab at the Necromancer with the share of his scythe, slicing through the demon's left side.

The Necromancer let out an agonising howl, kneeling to the ground in painful obeisance.

Ready to deliver a fatal blow, Skytten Saddle approached the Necromancer. Confident in his abilities, he drew his blade, preparing to end the scourge of the foul creature. However, his confidence was misplaced.

"You think you can beat me, the great summoner of dead and speaker of demons." Your bravery is foolish and has cost you your life."

The Necromancer quickly stood, conjuring a powerful spell that blew back the Sagittarius god with great power.

Skytten Saddle reached for his blade, but it was too late. The Necromancer picked him up by the neck and began to choke him.

The light faded, and darkness overtook as the Necromancer suffocated the life out of the god.

"Take this" from across the vale, a local villager hurled a firebomb at the Necromancer, hitting the beast.

The demon shrieked in throe as fire wreathed the foul beast, causing it to vanish from sight.

For now, the terror of the Necromancer was at an end, but it wouldn't be for long.

Skytten Saddle knew that the fell Necromancer would return and that far greater challenges still lay ahead. The Sagittarius god approached the villager thanking him for saving his life.

He chuckled to himself as, for once, it was the humans saving the god, rather than the other way around.

This wraps up our second lore book. We hope you enjoyed this deep dive into the kingdom of Genesis. Expect more lore books of this ilk in the future.