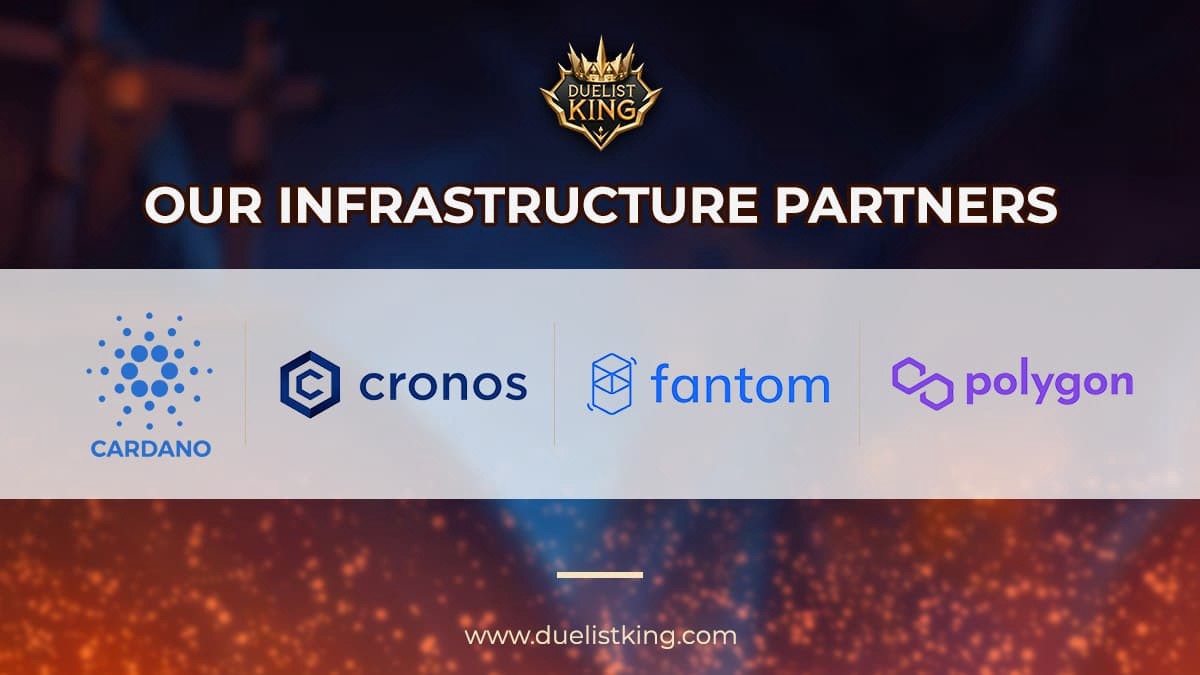 Duelist King, the up and coming NFT card game that is revolutionizing NFT gaming in general with its focus on democratization has been growing at a rapid pace with their recent waves of partnership announcements.

With some of the biggest names in the Cryptocurrency and blockchain industry such as Polygon or Cardano, we must talk about our infrastructure partners and explain to the community how they help in developing the foundation for Duelist King. They ensure that it is a sturdy and stable ecosystem and create a streamlined experience for you, the community!

For those of you who might know, Cardano is a blockchain platform that is the first to be founded on peer-reviewed research and developed through evidence-based methods. Duelist King is proud to be one of the first blockchain-powered games that are built specifically for Cardano.

Duelist King is in the process of building their infrastructure and will be going on the Cardano Blockchain at a later stage. Both teams have a matching vision of giving power to the community and ensuring there aren’t just a few accountable authority figures but the power lies with the many.

Cardano offers numerous support to make Duelist King a streamlined experience such as being built on the Ouroboros proof of stake consensus protocol and is built for unparalleled security and stability. This ensures Duelist King as a platform is safe, secure, and stable all while ensuring there is no hesitation when it comes to performance.

All of this allows Duelist King to be one of the first blockchain-powered games that is built for cardano to launch their initial DEX offering (IDO) on the OccamRazer Launchpad! Building our infrastructure on the Cardano blockchain, we are going to take advantage of the advanced NFT technology present within Cardano to revolutionize the NFT gaming industry!

Our registrations for our IDO is now open, if you’re interested you can join here

The eruption of the NFT market with more than $2 billion being spent on NFTs during the first three months of 2021 quickly brought a lot of attention to the industry, with new projects quickly popping up and people becoming more and more aware and interested in helping grow these projects. This is where Fantom comes in. Fantom has quickly risen to become the go-to scaling platform for brands and projects. This has quickly resulted in Fantom becoming one of the fastest-growing NFT ecosystems.

Fantom works towards ensuring the pain points that everyone faces with Blockchains such as high gas speed and slow speed without compromising security and decentralization. This becomes an issue for day-to-day payments that require quick and seamless transactions. Fantom aims to rid the community of these pain points as their high-speed consensus mechanism named Lachesis allows digital assets to function at high speeds and significantly improve the user experience.

There was an alignment between the values of Duelist King and Fantom which was to promote fairness is seen as a massive benefit for both communities, mainly Duelist King. This integration allows secure, quick, and cost-effective transactions as well as helping strengthen the Duelist King community. Duelist King will be working with the team over of Fantom to build a sustainable future of NFT gaming through adding tremendous value to the gaming and NFT ecosystem Fantom!

You can learn more about the partnership here:

Duelist King is proud to be using the EVM chain named Cronos. Cronos chain grants funds up to $1 million per project as well as being known for its portability and rapid growth. The Cronos chain is known to be compatible with smart contracts from Ethereum and other EVM compatible chains.

It’s also known to be scalable which allows Cronos chain to process more transactions than Ethereum, which makes it faster, cheaper, and more importantly greener. Duelist King will be the first project to be launched on Cronos chain. They intend to scale the Defi ecosystem and ensure the portability of applications from Ethereum and EMV-compatible chains.

Polygon is a framework for creating and connecting Ethereum-compatible blockchain networks. It’s considered to be the number one Ethereum scaling solution when it comes to DApps which allows it to have a stronger network effect. It has some of the top DApps under its belt such as Curve, Finance, Sushiswap just to name a few.

Their solutions allow for quick deployment of present blockchain networks as well as ensuring the quickly growing set of modules are present to work on developing custom networks. Duelist King is thrilled to be on the Polygon network.

With the Polygon network, Duelist King will aim to change the way the community buy, collect, play, trade and earn in card games. This integration will also allow a more transparent, community-owned, and decentralized card game as well as secure, quick, and cost-effective transactions!

We already see the progress that came with this partnership. During the Duelist King first batch of card sales 50,000 boxes were sold out in ONLY 45 minutes. That’s 250,000 NFTs sold out!

Furthermore, through the power of DAO and tokenization, Duelist Kings have created the first-ever democratic NFT card game where the player’s shape all aspects of the game. For example, Duelist King allows you to customize your deck, choose your gameplay, design your own game or build a unique tournament that the community can vote on via the DKT (Duelist King Tokens) governance tokens.