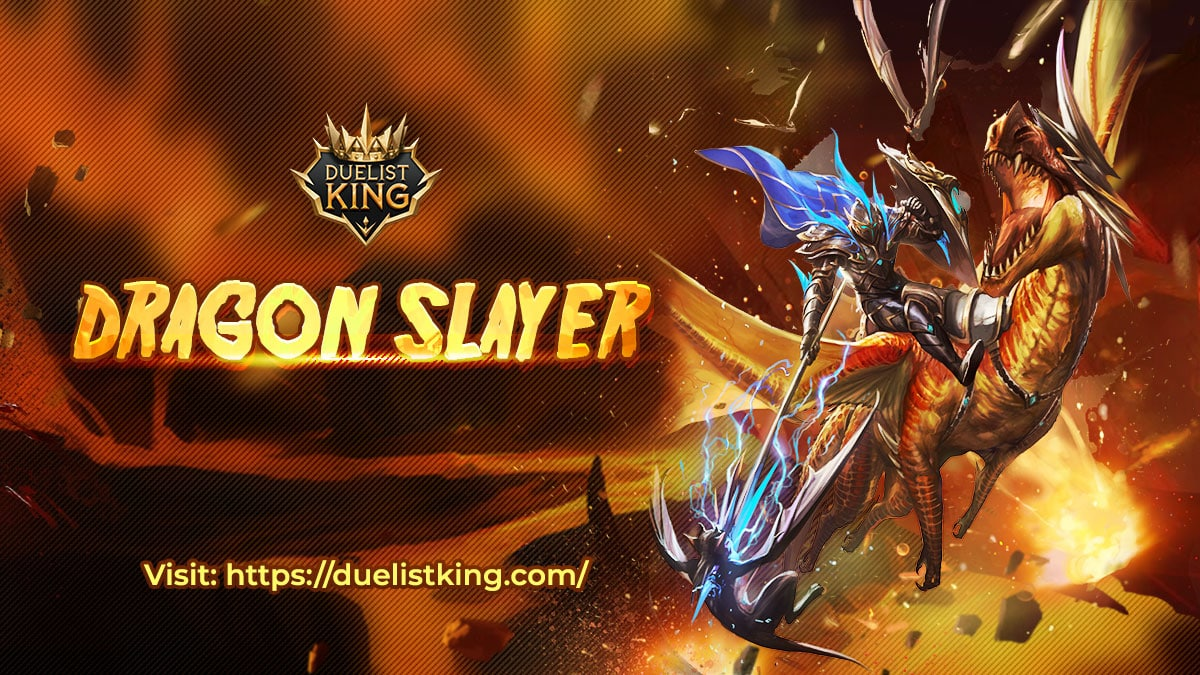 As you know we have been busy preparing for our next card sale. Over the last couple of weeks, we have asked you the community to help write our card stories that will release alongside the drop.

The story below focuses on another of our new V3 cards, Dragon Slayer. We want you to build Duelist King lore, and make your mark on the game, by suggesting edits to the story.

Dragon Slayer is one of our Legendary card types and one of the many powerful cards you can expect to experience next month.

The story below provides the origin story of Dragon Slayer and how a brave knight in defense of her kingdom, teams up with a dragon of great power to vanquish evil.

Hailing on the sacred dragon, the might knight vanquishes the darkness and all his foes with the light’s guiding power!

A proud knight stood tall, perched upon one of the many spires of her castle. The knight looked besotted, seeing the sunset on the lush green hills of her burg.

Pride filled her heart as she reminisced over how far her kingdom had come. Ten years ago, the domain was nothing but a small settlement, rife with thraldom and disease. Thanks to the hard work of her people and her leadership, all that had changed.

The knight continued to watch the sunset, squinting slightly as the suns rays met her gaze. Hearing a noise, she glanced over the vale, listening as she tried to figure out what the sound was.

The sound grew louder and louder. Her eyes widened as to her horror; a huge baleful black dragon emerged from the eaves, flattening trees in its wake. The dragon let out an ear-piercing scream, firing a jet of flame at her embattled fortress. Benighted the knight stood paralysed as the dragon made its way through her kingdom.

The screams of her people and the blood of her soldiers filled the air as the wroth dragon beset her people. Agast, the knight drew her sword from her baldric and attached her corslet, preparing for battle.

Adrenaline coursed through the knight’s veins as she climbed down the ramparts of her castle. She clutched her sword firmly, raising it as she approached the ill black beast. The dragon turned to face the knight with evil and malice in its eyes, eyeing up the knight as its next victim.

The brave knight blenched and shuddered as the dragon approached her.

She began to pray, hoping that a miracle would save her and her people. The dragon picked up its pace, running towards the knight with ferocious haste, suddenly stopping at the sound of a distant roar.

The knight looked up as another dragon, one sallow in colour, gracefully landed beside her, gesturing her to mount its back. The knight tentatively climbed onto the dragon, her vambrace making a humming noise as it brushed against the dragon’s rough scales.

The mounted dragon launched itself at the dark dragon like a lightning bolt, biting its neck and wreathing it in flame. The brave knight flanked the beast, swinging her sword at the black dragon, piercing its swarthy skin and heart through its thick hide.

The ill dragon roared in pain as the knight pushed the blade further into its heart until the beast could be heard no more.

The kingdom was saved, and a friendship was born. Thenceforward the brave knight would be known as Dragon Slayer, hailing on the doughty dragon and her friendship with the beast to conquer the darkness with the lights guiding power.