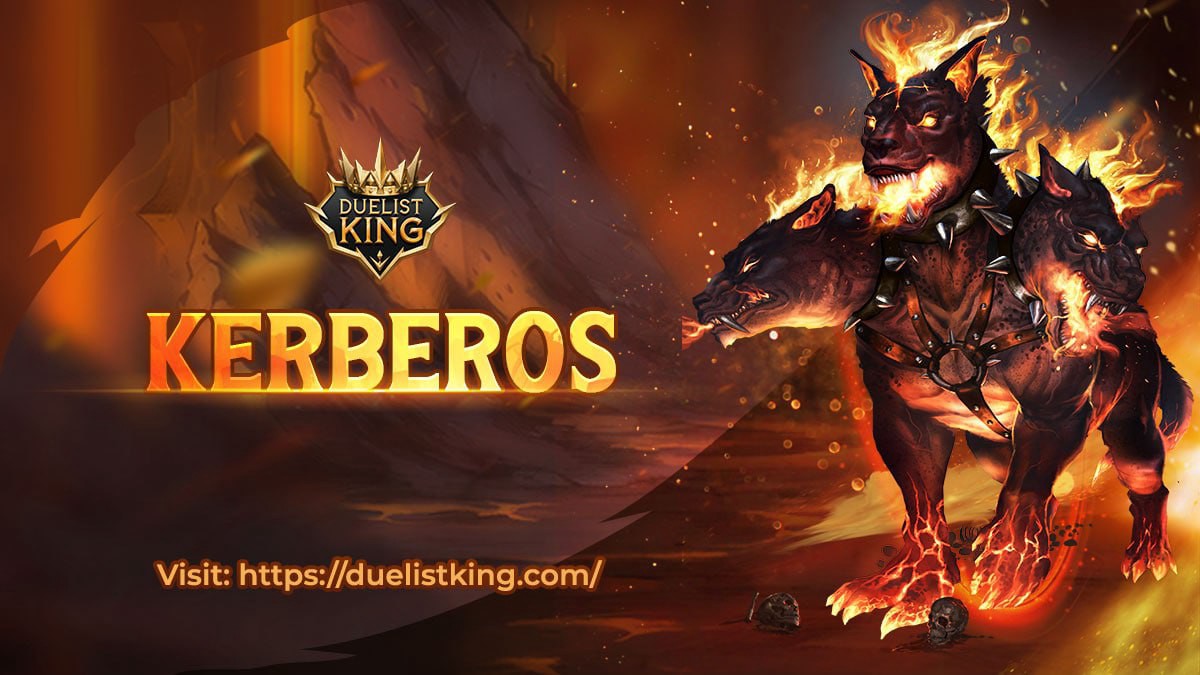 Next month, we will release our next batch of cards. Over the last couple of weeks, we have been preparing to release these cards by writing card stories for them. Each card for our next sale will have its own unique story.

We have been working hard to develop these stories and build out Duelist King’s lore. When the game releases in March, you can expect to see tailor-made card stories for each V3 card, giving you, the fans, a unique look into the lore of our game.

As you know, one of the main goals of Duelist King is to democratise gaming through tokenisation and DAO. We want to put you in the driving seat of our game, giving you permissionless, community-driven and transparent gaming, and that starts right now.

As a result, we have been working with you the community, to help build the lore of Duelist King by launching various engagement schemes to help us improve the stories.

The story below focuses on Kerberos one of our V3 cards releasing next month. Kerberos is a three-headed dog, born from tragedy, that rages through the depths of hell, tormented by its lost family. The beast is vicious like no other, surrounded by hellfire and brimstone.

Kerberos is one of our special super rarity cards and just one of the cards you can get your hands on when we release our V3 cards next month.

“This three-headed dog rages in the depths of hell, surrounded by hellfire and brimstone. It is fierce and vicious like no other beast before”.

In the dark, black depths of hellish land, Kerberos, the mighty beast of old, raised its three heads and looked up as embers dropped from the layered ash canopy liketh flames in the night sky.

The scolding heat of the underworld struck Kerberos like a salamander as the ancient beast rose from its slumber, causing it pain.

Kerberos alloweth a roar to mask the discomfort, which echoed throughout the dungeon that the creature laid dormant in.

Of course, the pain that Kerberos had felt was all too common. The fervent temperature of the underworld was torturing, not only physically but mentally. The discomfort reminded Kerberos of life gone by.

Kerberos was accouched from the ashes of tragedy, born from the remnants of death and despair.

Kerberos was part of an archaic race of three-headed dogs, a pack that tantivy roams the harsh wilderness of ancient jungles steeped in mystery.

However, one day, malevolent tyrants slaughtered his entire family, bestowing suffering on the great Kerberos as the only survivor of the sanguinary conflict.

Hereupon, Kerberos slew thousands on his crusades, vowing to smite his families assassins and thus was banished to hell by members of the chantre. Thenceforth Kerberos is afeared by those of the land where they dare to speak his name.

Kerberos finally stood, his mind quickly flitting to his dead family and their killers. The beast, fuelled by rage, alloweth out one last roar that shook the cavern, filling his body with hellfire and brimstone.

Tortured by his past, Kerberous beganeth his daily destruction through the dungeons of hell.