Explaining The Concept of Decentralized Gaming with Duelist King 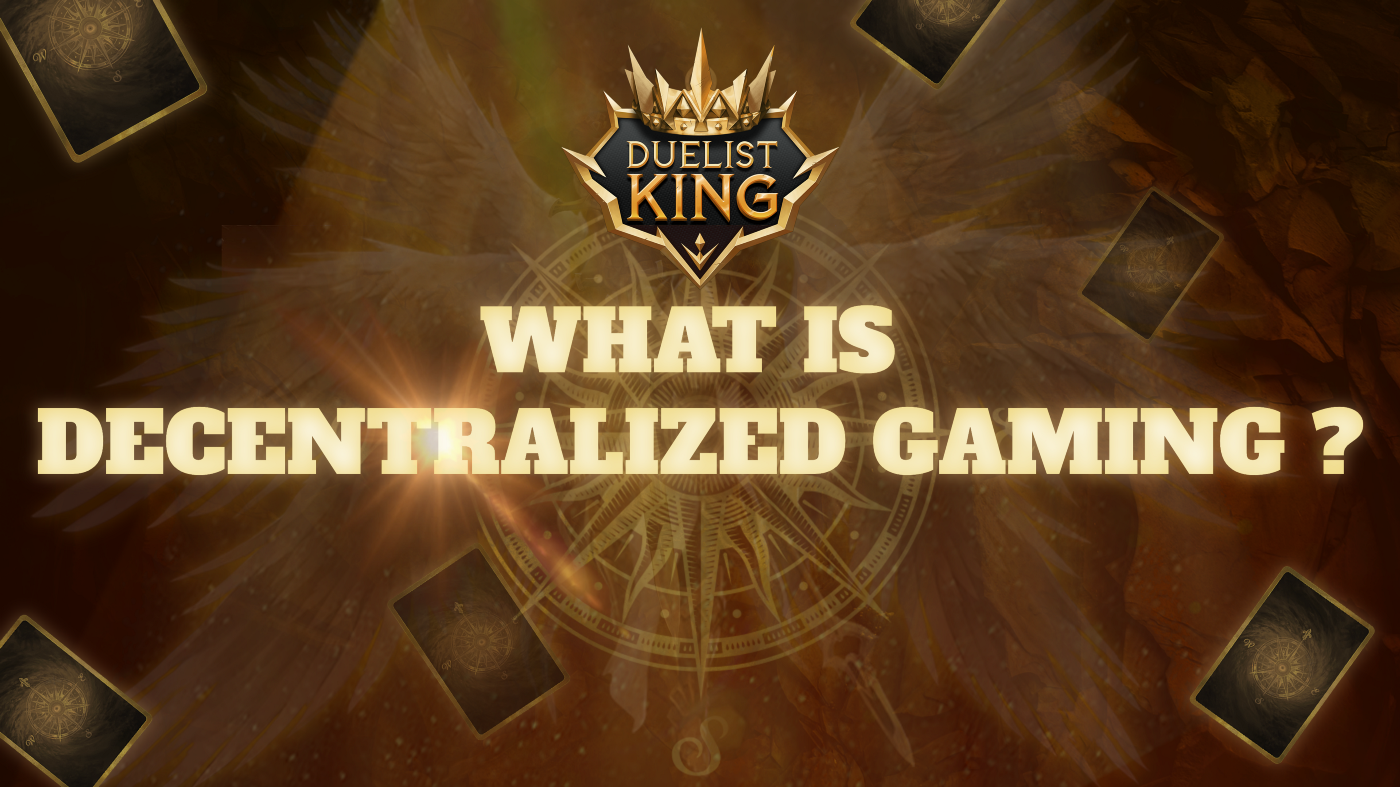 But, what exactly is decentralized gaming?

The concept of decentralized gaming

For a long time, the gaming industry has been dominated by centralized conglomerates that have seized a monopoly (pun intended) on how games are designed, sold, and played. When is the last time Hasbro, Activision, or EA did anything other than make games that line the pockets of their board members? The answer is never because it’s impossible not to if you’re a centralized company.

‘​​the process by which the activities of an organization, particularly those regarding planning and decision making, are distributed or delegated away from a central, authoritative location or group.’

So, a decentralized autonomous organization (DAO) has no central or official leadership and instead decisions get made from the bottom up, or in other words by the community. DAOs are collectively owned and governed by a set of rules that are enforced via a blockchain. This flips the traditional model of a CEO making all the calls on its head.

Decentralized gaming can be defined as any game that was built and either operates fully or partially on blockchain technology. Decentralized gaming applies the exact same principles of DAOs to gaming companies which when combined with blockchain technology enables transparency and proof of ownership. Furthermore, it allows gamers to have a say in how the game evolves, as well as the opportunity to earn while they play. All of which is transforming how we think about games. We no longer have to be passive players that have to pay-to-play. Instead, we can shape the games we love and earn while we play them.

What is a decentralized card game?

The card game industry was yet another billion-dollar market that has been dominated by centralized gaming companies like Konami, Nintendo, and Game Freaks. Collectors have never truly owned their cards because the companies maintain copyright, nor have they had the chance to feed into the design process, and eBay has been the secondary marketplace for collectibles which is often flooded with counterfeits.

A decentralized card game solves all of these issues with the power of blockchain and DAO. Non-fungible-tokens (NFTs) provide undeniable proof of ownership and a legitimate secondary market for collectors to sell and trade their assets. Furthermore, decentralized card games provide an opportunity for any player or collector to come up with ideas for the game’s ecosystem that could become a reality if they are popular enough within the community.

So, a decentralized card game is a game where the community creates designs, proposes new games, and runs unique tournaments. It’s an ever-evolving gaming ecosystem that utilizes DAO and blockchain technology to govern a decentralized group of people who share the same passion for playing card games. It allows them to work together to create a game that they can truly call their own. Something you won’t get from Pokemon or Yu-Ghi-oh!

How does it work?

The functionality behind decentralized games operates on a blockchain level where smart contracts govern votes from the community that are made using governance tokens. Governance tokens are native or in-game cryptocurrencies that can be bought or awarded as prizes to give an individual voting power within the gaming ecosystem. Anyone with governance tokens can vote on or create proposals that suggest new ideas or ways of working for the game.

An individual can choose to lock up more tokens to get more voting power. For example, someone that locks up 1000 tokens will have more voting power than someone that locks up 100 tokens. This helps protect the game’s ecosystems as people who are truly invested in the game will have more of a say over what happens to it. This stops trolls from being able to come in and destroy a game with just one token.

There are several blockchain games that are adopting the model and philosophy of decentralization and tokenization. Immutable, who are behind the popular NFT trading card game God’s Unchained recently announced that they will be issuing $GODS token which will operate as a utility and governance token. It will give their players a voice in the God’s Unchained ecosystem while providing them additional earning opportunities via staking.

Evolution Land is a virtual business blockchain game that operates cross-chain. There are 26 continents such as Atlantis that runs on Ethereum and Byzantium that runs on TRON. Players can buy and sell land, mine elements, build structures and make props. Furthermore, the players can autonomously set governance parameters such as trade and tax rates. The players literally shape the gaming ecosystem and own all of the in-game assets which they can then trade or sell for digital currencies. The game’s native token is RING which players can lock up to gain voting powers and the right to create proposals to share with fellow gamers.

The above examples highlight the mass adoption of decentralization across the world of blockchain games. Players are now becoming part of a game’s ecosystem with the ability to have a say on how the game evolves. They also have an undeniable right to the ownership of in-game assets thanks to the blockchain technology behind NFTs. This model is a look into the future of gaming where all games will be run by the players themselves.

Here at Duelist King we are implementing and evolving the same concepts. Through our native in-game digital currency, Digital King Token (DKT), players, collectors, creators, and investors can influence the game by creating and voting on proposals. For example, you can customize your deck, choose your own gameplay, design your own game or build a unique tournament that the community can vote on. The Alpha version of the Duelist King game will be released in November but if you can’t wait that long, the demo will be released on the 25th of September. Stay updated through our community channels so you can be the first to experience the next generation of democratic card games.

Blockchain technology and decentralization are redefining the gaming sector. They are helping the industry move past the top-down model where a small number of corporate elites decide on the style of play, designs, and price. In the future of decentralized blockchain gaming, the players will be in the driving seat. They will have true democratic power over the game and verifiable ownership of any assets they purchase. Gamers will no longer be ‘spending’, instead, they will be investing in the game they love.

Duelist King aims to transform the way people play, participate and earn in card games through top-notch game play, asset designs and advocacy for the sustainable future of Play2Win and Win2Earn